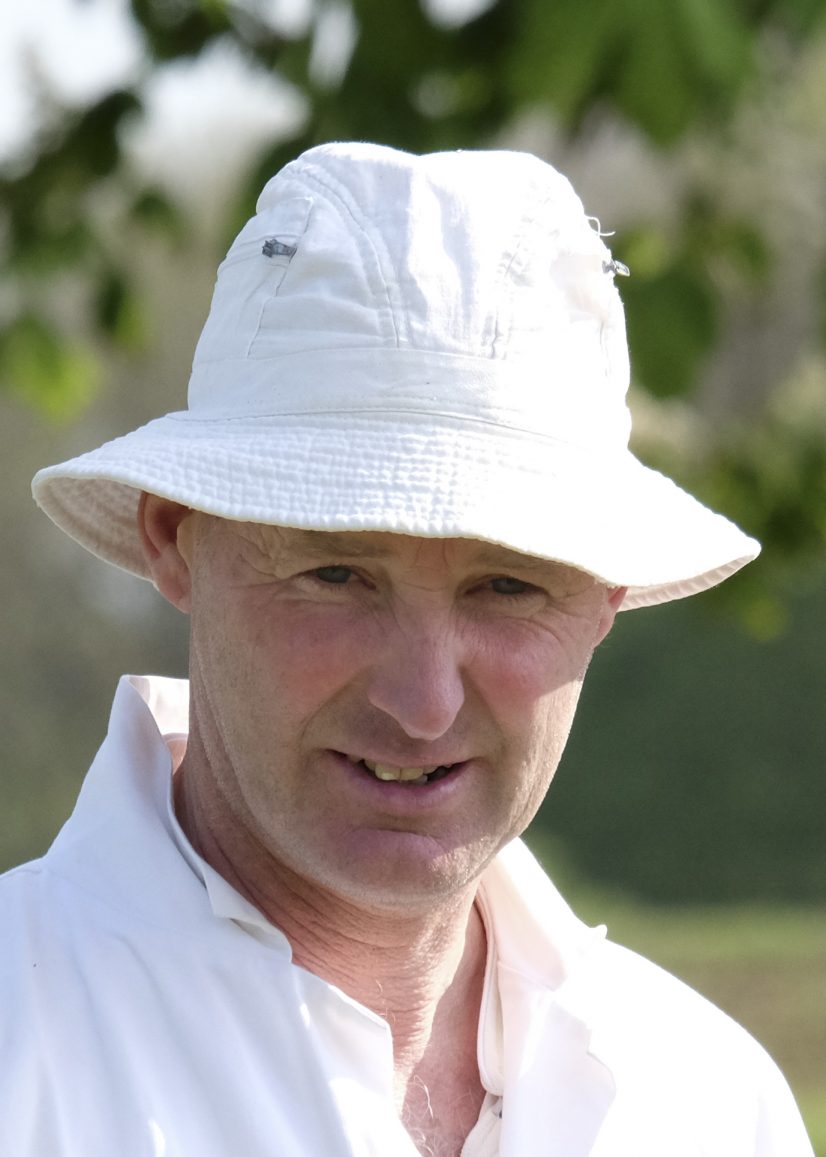 WARNING: THOSE WHO REMEMBER ENGLAND CRICKET OF THE 90s PLEASE READ WITH CAUTION

The fixture computer combined with the Sherston Boule weekend looks destined to throw up a home and away fixture against the same opposition in the first three weekends on every season. This season the team was Purton (who boast some familiar faces in their ranks!)

So to match day, and upon arriving at Purton’s ground, the batsmen of Sherston were licking their lips at a cracking batting pitch and an upturned saucer bowling green outfield. (Come on Skip win the toss!). So it was with little surprise that Sherston were walking out just before 1pm to field.

An opening salvo from our pace duo Nelson and Pegg resulted in a number of boundaries and a flurry of wickets and after 6 eventful overs, Purton sat at 37-5! Pegg continuing his wicket-taking form to top the wicket-takers with 9 after 3 games. Out strolled the Purton number 7, who would become a key figure in the game. Never in the game of cricket has anyone combined commentating on every passage of play with the playing of the beautiful game. Sherston left Purton thankful that there is no third fixture to hear this in 2019!

The No 7’s innings ended with the score on 102 having somehow picked up 35 runs and few friends from fielding team. Some excellent caretaking bowling from the skipper (2-9 off 8) and a couple of wickets from Hulance ended the Purton innings on 130.

After the tea break, the Sherston openers started well with some eye-catching drives and solid defense (although the soundtrack of the day was still being provided by the Purton No 7!). The game looked like it was drifting to an easy win at 76-0. This was still looking comfortable after the departure of Cartwright (37) and Harmer (38) at 103-3. But cricket is a funny old game.

Following Fisk holing out at deep mid wicket, Reed followed 1 run later via a direct hit from a risky second run, the Sherston dressing room was getting busy. When Dickenson followed with the score on 108, the skipper strolled out only to stroll back a short while later after being run out following some dubious calling. Purton were sniffing a chance and the 22 runs to win were looking as unlikely as winning the toss and bowling in Brisbane. After Peggy was left staring at the wicket after a wrong un from Goodwin (not that one!) Sherston had lost 5-6!

At 113-8 and 18 to win, with DFP on 1, Nelson on 3 and only Hulance in the hutch, Sherston were dealt what some thought was virtually the nail in the batting collapse coffin when Nelson was bowled. Purton were cock-a-hoop, a sniff of an unlikely win at a second Sherston batting capitulation.

Most of the Sherston side now fearing the wrath of the fines master, were watching waiting for the end but with that last bastion – hope still playing with emotions!

Hulance and DFP playing sensibly were eeking the target towards single figures but then an outside edge from Hulance and hopes dashed, but NO dropped and Sherston live to fight on! At the other end an edge from DFP gave another difficult chance down which was shelled, Sherston couldn’t pull it off could they… 8 to win… then 4 to win…. then 3…..2…..eeeeeekk!!!!!

A ball down the leg side and a glance from Hulance and the scores were tied at the end of the 41st over. Could Sherston finish the job… The first two balls of the next over hit fielders but the third was flashed through wide mid off from DFP and the game was won! A 21 run last wicket partnership gave Sherston a 20 point win and second in the table.

So honours even in the battles of Sherston and Purton but who will win the war, only the final league table will tell! The scorecard can be found here