Cricket in the late 1950s and 1960s was played in Pinkney Park with kind permission and plenty of support from Major Rowcliffe. He remained as president of the club through it’s duration. He used to entertain his staff from his London office with a hospitality marquee overlooking the ground. The club always arranged a home fixtures and afterwards the teams were welcome to the festivities. As can be seen from the copy of the 1961 fixture card many local dignitaries were vice presidents and many of the names would be recognised today. 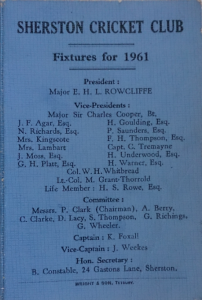 The club only played one game at the weekend so there was always competition for selection. The cricket, however, was not as competitive as played by today’s club and we were playing many local village teams such as Seagry, Goatacre, Tormarton, Nettleton, Winterbourne to name just a few and not forgetting the usual major battle with Tetbury.

The old club always had problems which are still ongoing with today’s club over just a few people doing all the work to keep things running. The club finally ceased playing and closed down when a disagreement between management and members over a rota system to try and ensure a more even workload failed.

The new club was formed in 1990 and started playing cricket using a Malmesbury School pitch as no facilities were available in the village. When the parish council purchased the current sports field it was intended to be used by all sporting activities in the village. The cricket club tried share the facility but quickly realised that trying to combine cricket with football and a tennis club restricted the available space and a dedicated playing surface was impractical with overlapping seasons. Some grant aid was given by Sherston council to the club and negotiation were started with Captain and Mrs Matthews to enable cricket to be played once again in Pinkney Park. A lease/constitution and planning permission was granted in 1993 and the new Sherston cricket club was back in Sherston. A mobile unit was originally used until Pinkney Park purchased and erected for the club the current pavilion in 2000 to enable the club to have proper changing and shower facilities etc. 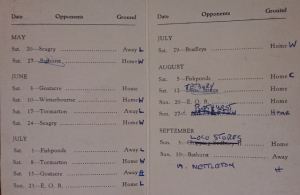 A good relationship has continued with Pinkney Park and the club can now play competitive league cricket with these good facilities. The future looks good with recent fundraising with the Smile project. The money has been used to further upgrade the practice facilities with two modern practice nets to ECB standards. The development of junior cricket with top-grade coaching should ensure a bright future for Sherston Magna Cricket Club with the emphasis being concentrated on recruiting and training future cricketers.

The menfolk of Sherston have enjoyed playing the game of cricket as far back as the fifteenth century, when it was then known as ‘Stoolball’. Using an upturned milking stool as the wicket, the defender would strike the opponent’s ball which was made from leather stuffed with reed. His ‘staffe’, or bat, was made from withy, and would be approximately forty-two inches in length. A point would be scored each time the defender hit the ball.

In 1634 the Archbishop of Canterbury stated “many games and pastimes occupy people, when they ought to be at church, both on Sundays and Holidays” and in particular, mentioned the people of Sherston and the playing of Stoolball.

In the 1930’s, in the grounds of Pinkney Park, the village had their cricket pitch. A perfect location to spend a warm Sunday afternoon in the shade of the trees, watching an exciting game of cricket. Billy Thompson, who was vice-captain in 1938, provided his Chrysler motor van to convey the teas, which had been prepared by the wives of the team members and were served in a large tea tent. 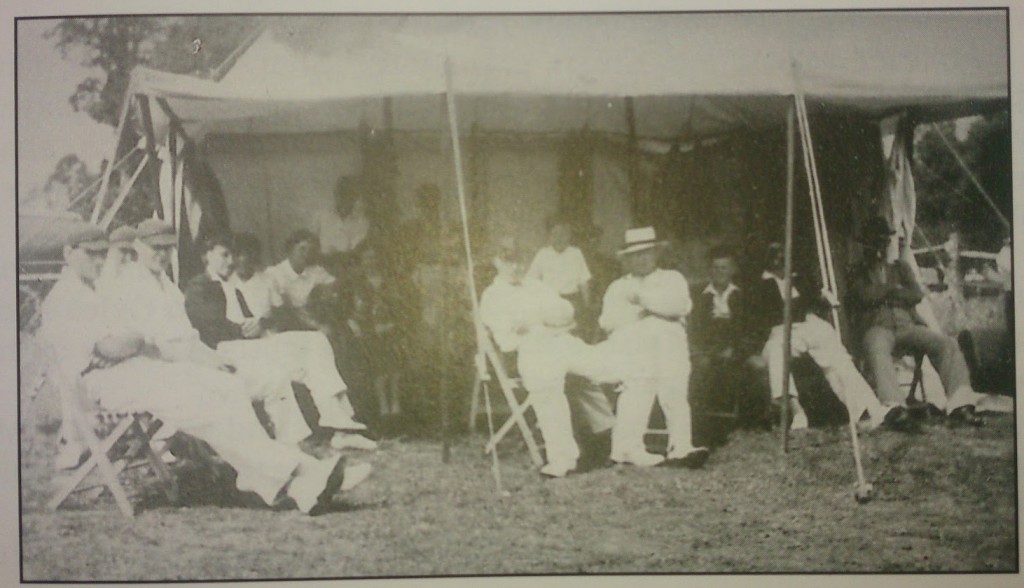