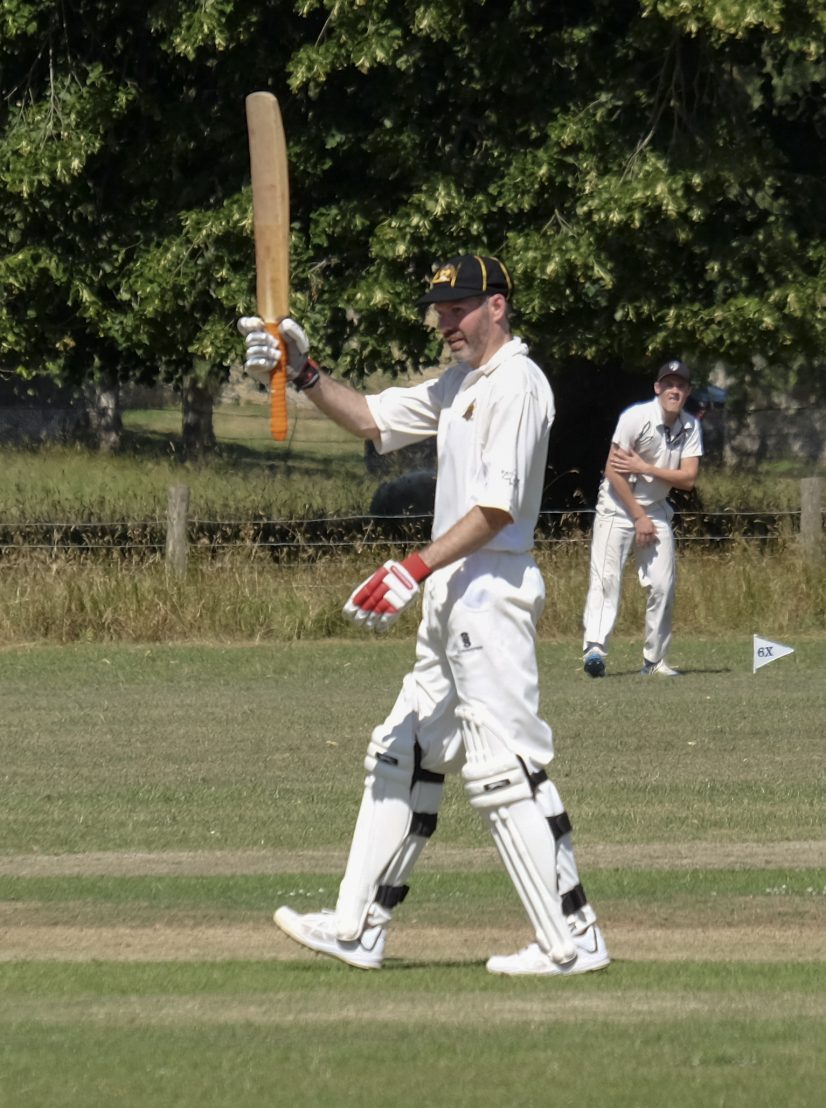 On what was probably the hottest Saturday afternoon of the year so far, the Heytesbury & Sutton Veny 2nd XI captain called tails and to the delight of the Sherston players it came up heads. It was going to be a tough afternoon for whoever bowled first – the Pinkney Park pitch looking in prime batting condition, the outfield likely to give full value to every shot, and the heat certain to sap the energy of bowlers and fielders alike. JK had no hesitation but to bat.

Despite losing Walsh early, Sherston made steady progress reaching 88 by the first drinks break. Alan Dickenson looked in great nick, playing majestically on both sides of the wicket, so it came as somewhat of a surprise when a ball just stopped a little on him and he lobbed a return catch to the bowler for a well-earned 48.

Bruce joined Reed and the runs continued to accumulate, initially with some fine running (Bruce pushing Reed to run a 4) and then some big hitting once Bruce had got his eye in. A century partnership was shared before Bruce fell LBW for 59, bringing JK to the crease. The runs continued to flow until a tired looking shot saw Reed depart for a better than a run a ball 106.

Some fine hitting and running from both Ben Dickenson and Andy Pegg, in support of 43 not out from JK, saw Sherston to 301 at the end of their 45 overs.

After a fine tea (that rumour has it cost Stavri a spa-day…) Sherston took to the field, with the temperatures still high and work still to do. Ben Dickenson took a wicket in only the second over to calm the initial nerves, but this was going to be an afternoon where Sherston were going to be made to work hard.

Jarvis took a fine catch to remove their dangerous looking number 3, the ball travelling fast but within his 1 meter range of motion. Despite the heat, the fielding remained excellent throughout, particular mention to Walsh, Stavri and Frost patrolling the boundary, making 2s into 1s – 3 of their top 7 falling to run-outs as the pressure told.

The opposition skipper made a fine 64 before being bowled by JK, who then combined twice with Ben Dickenson in the deep – on both occasions Ben taking superb high catches in the full glare of the dipping sun. JK hit the stumps again to finish with figures of 4-22, and Frost sealed the victory with a delivery that suggests a bright future ahead.

A hot day, but a good day, Sherston winning by 88 runs.