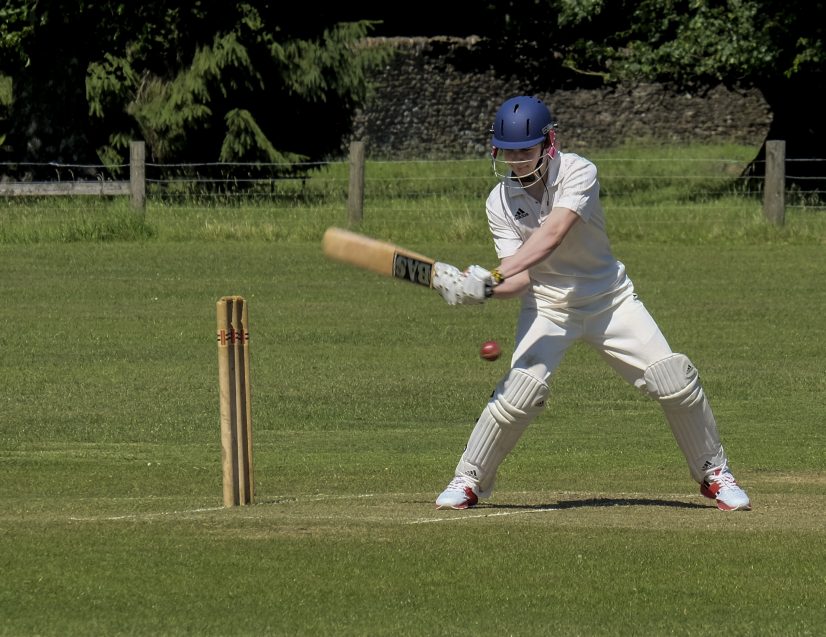 On the hottest day of the year so far, South Cerney travelled to Pinkney Park with the unenviable record of having not won a match at the ground in recent memory, if ever.
With the toss won by the home side, and with both the wicket and weather dictating a simple choice of ‘bat first’, all looked good for a decent score to be accumulated whilst watching the opposition slowly melt into their own boots.

If only. Both of Sherston’s openers were rapidly returned to the hutch in quick succession, with the Pinkney residents left reeling on 6-2. A steadying of the ship came about over the course of the next 15 or so overs, but some excellent field placement by South Cerney prevented the run rate from reaching much above 3 an over. The resulting pressure culminated in a reasonably quick tumble of wickets, leaving the home side on 81-6 and wondering/hoping if we might make it to a century.

However, on this day, 17th June 2017, a young lad by the name of James Skeldon, who was partaking in his first ever men’s league cricket match, stepped up to the Pinkney crease and proceeded to show both guile and flair in equal measures, and helped Sherston start to build at total that was hopefully defendable. With some delightfully wristy shots off the back foot, coupled with some confident front foot placement, he accumulated a valuable 19 off as many balls – and he even managed to get Andrew Jarvis to run a second!

The invaluable partnership between youth and experience sadly came to an end, but not before Sherston had reached 112-7 and some hope of a half-decent target had indeed materialised. Jarvis continued on, top scoring with 29, and with a late flourish by Walsh, Sherston finished on a semi-respectable 157.

Game on. Having sampled a match tea which could surely only be rivalled by that of Marylebone Cricket Club itself, it was now down to the bowlers to do their bit, albeit somewhat weighed down by the aforementioned culinary delights that had been on offer. With a plethora of bowling options at his fingertips, and with the temperature hovering at 27 degrees, the captain pre-allocated 4 over blasts from his attack.

The two South Cerney openers were seen as the danger-men in their line up, and if Sherston were to stand a chance of winning they would need to be returned to the hutch as efficiently as they had dispatched our own. However, within the first couple of overs both batsmen had been let off with a couple of sharp chances being shelled. More often than not, those exact situations in those sorts of temperatures can lead to heads dropping.

Not today. Sherston rallied and kept the pressure up. Another sharp chance to gully – and this time the ball lodged ‘firmly’ in the armpit of Moore. A couple of overs later the second opener misjudged a yorker and was clean bowled. This left the visitors on 35-2, a position that wasn’t too bad considering the total they were chasing. However, what fast became apparent was the length of the South Cerney tail. Wickets tumbled regularly with numbers 4 to 11 only scoring 17 runs between them, and with our own side equalling that in extras this helped them along to 74 a/o. Si Hullance took the bowling honours for Sherston, with 6 overs, 4 wickets for 13 runs. NB Serious jug avoidance – and hopefully noted in the fines.

And so ended the day with Sherston maintaining their unbeaten run at home over South Cerney. Next week Sherston travel to Barnsley Beeches – a side with whom there’s no love lost after last season’s away fixture. Onwards!