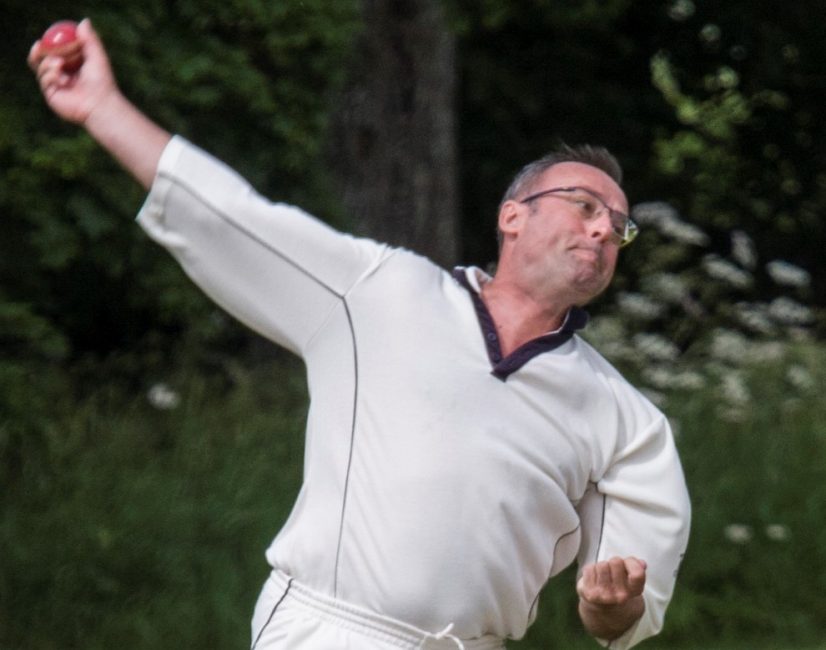 With black clouds circling, winds blowing, storms threatening and Tina Turner’s words ringing true that all we wanted was life beyond the Thunderdome, your intrepid reporter entered the appropriately named Memorial Ground a mere one over late having travelled some three hours from London via Bath. Wondering whether I was ever gonna change, I had taken the liberty of changing before arrival, living under the fear of another fine until nothing else remained.

Tetbury CC batted first with Peggy and the miserly Harry opening the bowling. Harry bowled very tightly going for only 2 an over, whilst runs were flowing slightly quicker from Peggy, who had to contend with bowling into a head wind. The break through finally coming in the 9th over with Mr Lovell snapping up a regulation catch in the slips off Andy with Tetbury on 4 an over after 9 overs.

At this point Slake M’Thirst (J.K./Janitor) called on our resident hero Mad Max (Iggy/Rockstar), to enter the Thunderdome and bowl from the pavilion end. There followed an exhibition of tight on the spot bowling with Iggy returning excellent figures of 3 for 14 of 9 consecutive overs strangling the life blood out of the Tetbury innings. From the other end Peggy was replaced having bowled 6 respectable overs in difficult conditions returning 1 for 25, by young Lorcan one of the young hopes for the future of Sherston CC.

Lorcan bowled 5 excellent overs into the wind, Tetbury only getting on top of him in the last over where he was replaced, the force is strong (editor wrong film?). It was at this point that Slake M’Thirst turned to his elder tribesman Scrrooloose (Charlie/Tail gunner) to replace Lorcan. Summoning all his strength he managed to reach the stumps and remove the last major threat of the Tetbury innings with a stunning rank long hop, excellently caught by Lorcan. Meanwhile Laura was brought on to replace Iggy and bowled a very tidy 3 overs as Tetbury were chasing runs, some could argue better than her husband in relative terms.

Slake M’Thirst then sensing a Janitor moment put Scrrooloose out of his uphill struggle and took over the bowling and mopped up the tail with an unbelievable 5 for 8 off three overs. This included the first “four in four” (sometimes known as a double hat-trick) I have ever witnessed. One way or another it was to prove a crucial over and J.K. masterfully restricted the Tetbury innings to 129 out. Our very own Savannah Nix who had been bravely scoring in inclement weather clapped her children into tea whilst Tetbury’s score lady Aunty Entity appeared grim faced.

After tea a spirited well planned early carefree blitz by JK and pinch hitter Peggy ensued, but both holed out in the 5th and 6th over but we were 36 for 2 chasing 129 after 6 overs so the future still looked bright. Chris was unlucky to be given out LBW for 7 due to extreme pressure from the fielding side, who arguably should have asked him to return. Meanwhile the effervescent Mr Bruce was making hay with an excellent 23 but wickets were falling and after a quick cameo from DFP it was quite apparent we did not need another hero we needed Iggy to perform, who had been cunningly held back to bat at 6. With overs drying up, sledging reaching crescendo, batsman falling and victory slipping away, despite a very important contribution from Harry. Our gallant number 11 prepared for battle perhaps it was my imagination but I swear I heard Will singing “Out of the ruins, out from the wreckage, Can’t make the same mistakes this time” as Iggy (41 not out) in increasingly gloomy conditions to hit the winning boundary with 8 balls left, I reflected that we had indeed found another hero in our number 11.

Scorecard can be found here