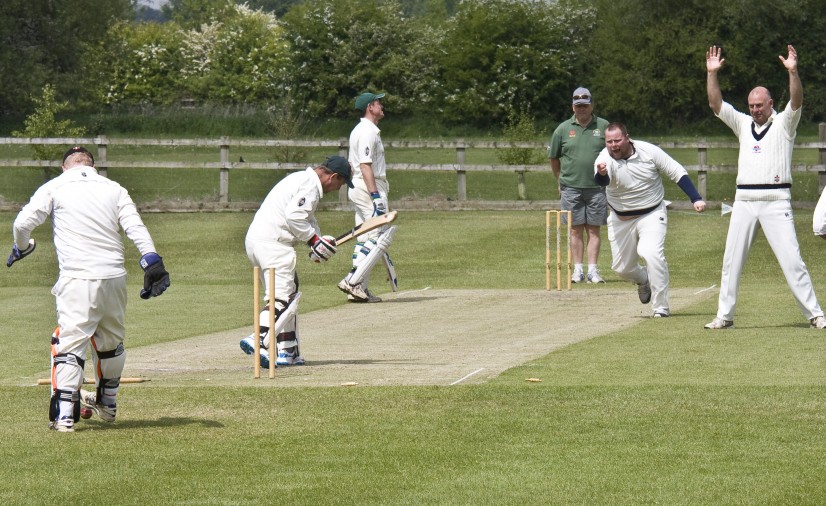 The weather has seemingly been kind so far in the cricket season, and another glorious Saturday of sunshine greeted us a we met at Angel House for the short trip to Cricklade. The day started well, the skipper winning the toss and looking to know what we were chasing inserted the opposition on what looked like a slowish pitch and on a muggy day. New ball pairing Hulance and Pegg, getting plenty of movement but lacking the accuracy which would sum up the Sherston performance in general. Other than an excellent spell of 10 overs for 29 by Ben Dickenson it looked unlikely that Sherston would be picking up many bowling points and when the substantial framed left hander from Cricklade came in and began to threatened taking the score well past 200. It was beginning to look like an up hill task when Hulance produced an over which would change the game. The left hander was caught at long off under a steepling ball , the next caught at long on, followed by one at orthodox mid off. Three good length balls, three mistimed shots and three great catches. Congrats to Simon on that and he followed up in the next over with another wicket to finish up with 5-54. Cricklade finishing on 210-8 off their 40.

In reply, Sherston started positively and looked comfortable with each of the top 4 batsmen getting past 25. Richard Cartwright looking in particularly good knick before missing a straight one for 46. Sherston were ahead of the rate for the first 25 overs but each batsmen after looking set somehow contrived to get themselves out, the rate started to climb. When Harmer was fifth man out underedging one through to the keeper for 25, including a 6 on to the top of a very riskily parked mini, the look of disappointment on his face summed up the chase. Sherston slipped from 152-4 to 169 all out including a calamitous stumping from the marauding Fitch Peyton, one dismissal everyone present will never forget!

So a disappointing defeat in a game we looked like winning. So time to pick ourselves up and play 4 times champions in the last 5 years, Adelstrop at Pinkney Park on Saturday.