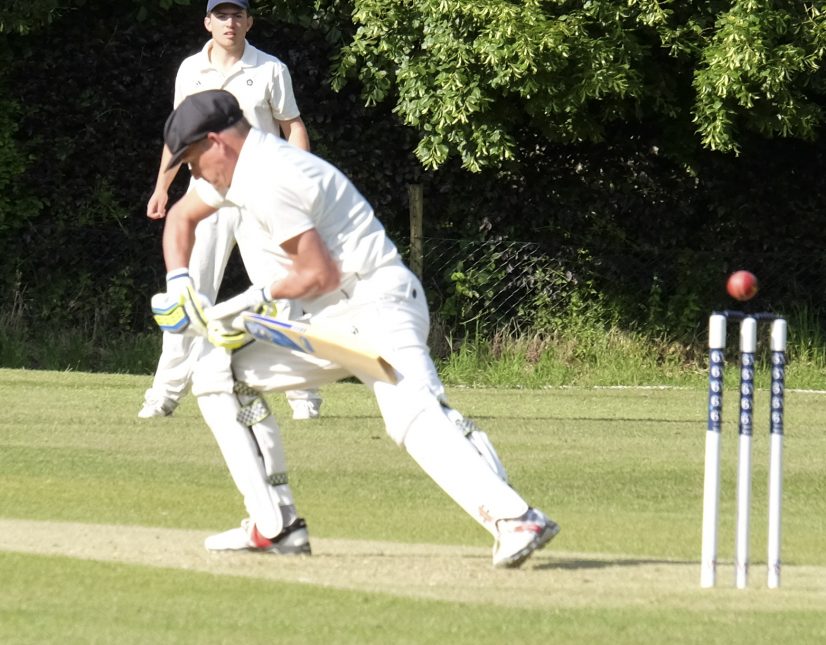 Looking to take their run of wins to three, Sherston travelled through heavy traffic to Hinton Charterhouse’s ground, arriving a little later than was ideal and limiting time for the team’s usual warm up and stretching routine. With a team packed full of athletes at the peak of their respective
physical condition, this was going to be a risk and so it proved…….

Dickinson, captaining the side in Kutchera’s absence, saw the home side win the toss and elect to bat high in confidence from scoring over 360 the week before, with one of their openers making an impressive 200 not out. But not this week, Pegg taking the edge in only his second over. However, it may well have been Pegg’s next over where the game turned, a hamstring tear that saw the team’s premier left-arm pace bowler unable to contribute with the ball for the rest of the afternoon.

Despite that, and on a ground offering full value for every shot, Sherston did not really let the home side get away. Nelson was very frugal for his 8 overs, whilst Stephens had a number of the batsmen in trouble – in particular, the opposition skipper who could not help but dance-down the wicket, only for the ball to spin passed his outside edge for a fine stumping. At the end of the innings some fine bowling from Cartwright and Fisk coupled with good catching from Reed in the deep exposed a
relatively long tail, limiting Hinton Charterhouse to a more than chaseable 205.

As has been a common feature of the season so far, Sherston started brightly. Cartwright looking in particularly fine form as his first five scoring shots all thudded into the boundary rope. It was, therefore, a surprise when a slightly loose shot saw the catch held and his fine innings come to a
premature end. In keeping with another common feature of this season, a flurry of wickets soon followed – some slightly more controversial than others (can we invest in our own ball tracking system?)

However, at the other end Fisk was striking the ball superbly well making a fine 37. The middle order then came into their own, Stavri a Sherston best of 23, and Dickinson 22 to give Sherston a sniff…..could we see another Purton-like finish? Nelson was certainly keen as he played some magnificent front foot shots to the boundary, but when he was last man out for 36 Sherston were still 30 short.

A game of ‘what ifs’. A couple more early wickets, a couple of catches held, a couple of decisions going the other way…….what a cruel game cricket can be, but we still love it!