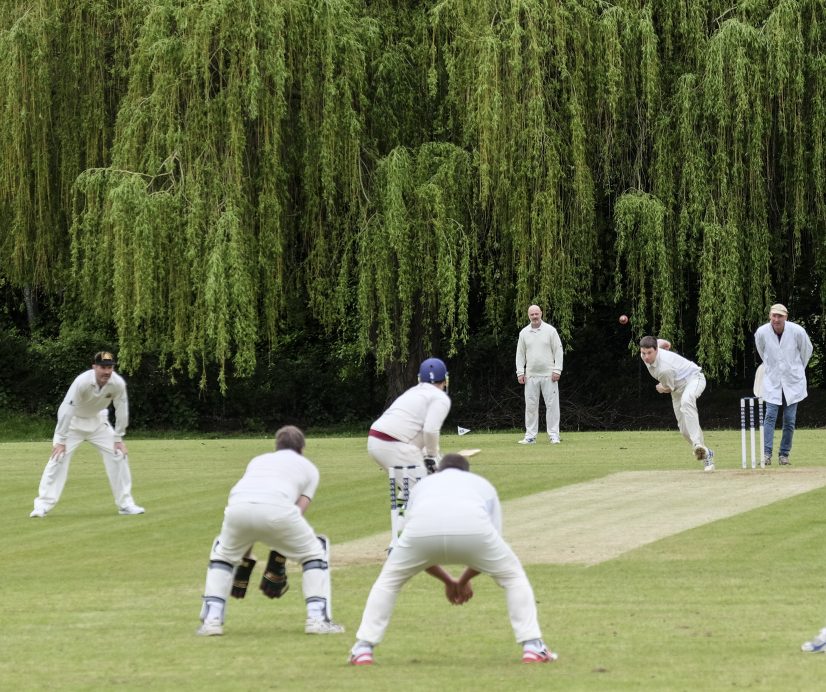 Saturday 17th August saw us travel to Erlestoke for what could be a season-defining contest. Sherston, second in the division and only 2 points ahead of rivals Erlestoke, with 3 games to play.

Erlestoke won the toss and asked Sherston to bat on a stri[ that despite having been covered had allowed some precipitation to percolate onto a rather nice length for the bowlers.

Openers Fisk and Cartwright were soon separated when Chris Fisk fell foul to the damp patch with a ball gripping and spitting off his gloves.

James Harmer, making a rare appearance, was in at number 3. The old pairing rolled back the years and punished the Erlestoke attack with a bevy of boundaries, bringing up the 100 in the 15h over. A solid foundation had been set and a total of 300 looked a real possibility.

What about that damp patch? You may ask. It produced the first false shot from Cartwright (58) and ballooned up for an easy catch. Hall (4) and Walsh (5) were both leaned up by good balls.

Could anyone stay with Harmer and get Sherston back on track? Ed Reed (23) made a fine start before falling to some erratic leg-spin. Harmer (63) fell lbw to the same bowler after a fine knock.

What about the 300 total? You may ask. Only Captain Pegg (11*) offered any resistance and the innings ended criminally early with 11 overs still to go.

Sherston Magna 215 all out.

Could Sherston defend the lowest first innings total at Erlestoke this season? Could they look to cement 2nd place in the league and put hopes of promotion in their own hands?

After 20 overs of Elestokes reply, you would think not. Very tight bowling from opening bowlers Pegg and Nelson went unrewarded. Hulance and Cartwright also created chances. The reward however, was restricting Elestoke to 4 runs an over and keeping them behind the run rate.

Dark clouds billowed up and it looked like rain was coming to play a part in the result. Significant moisture hit the wicket before the covers were pushed into place. After a short delay, the bowlers were keen to take advantage of the freshened surface.

Simon Hulance broke the deadlock with one of many unplayable deliveries. The new batsman carried on where the other left off, slow and steady. Could Sherston keep a stranglehold and take wickets? Dave Nelson came back and bowled another great spell with no luck.

Then to the turning point of the match, Erlestokes opener Barton, who’d already scored 1,000 runs this season, pulled a short pitched delivery from Archie Walsh for 4, Barton, was obviously very pleased with himself, he announced to the whole fielding side how he ‘loves those half trackers’. Walsh, who is maturing into a very useful all-rounder, cleverly repeated the short pitched delivery. Barton flapped a bat at it and looped a catch to Captain Pegg. I think I recall the Sherston players reminding Barton about his love of ‘half trackers’ on several occasions.

Chris Fisk, the wiley spinner, picked up a wicket in a tight spell, well caught by Harmer. Wickets had started to fall and the run rate hadn’t picked up. The pressure built and a run out ensued.

Walsh bowled possibly the best spell of his career, he was totally in the zone, no wide balls, no leg side bowling, just sharp and intimidating. He sent the middle stump cartwheeling, a great sight.

Walsh to bowl the last over, 12 runs required by Erlestoke. He dealt with the pressure like a seasoned professional. The home team finishes on 207-7 from their 45 overs.

Two games to go. Goatacre 3rds at home and Spye Park away.