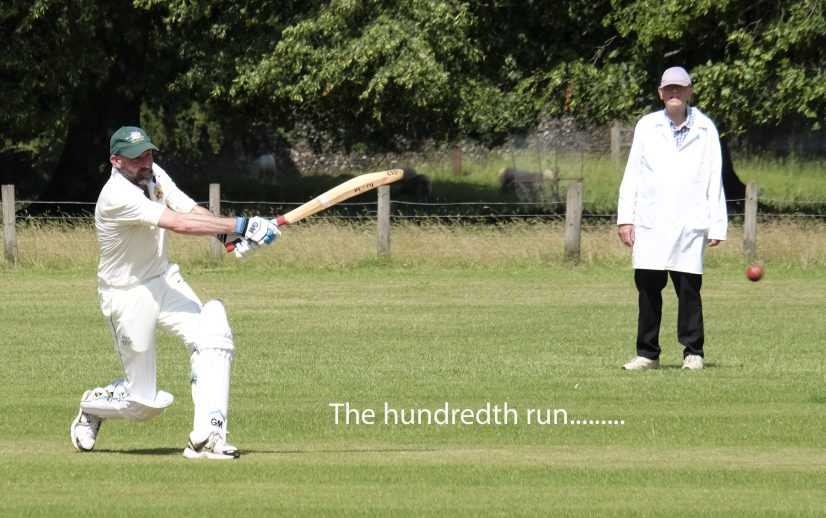 Saturday saw the visit of Spye park to Pinkney Park. On a perfect summer day with a flat track and fast outfield on offer, the bowlers of both teams were willing their respective captains to win the toss and bat. Sherston’s J.K duly obliged.

What came next, however, was not part of the script, James Harmer, opening alongside Chris Fisk bowled for a diamond duck. When Chris failed to convert a tidy start , the game looked in balance.

D.F.P and Greg calmly went about rebuilding the innings, D.F.P looked solid and Greg found some fluency on his way to a chanceless fifty, by the time D.F.P reached a fine half-century of his own, Sherston aided by some wayward bowling from the visitors had established a solid platform for the middle order to build upon.

The dismissal of D.F.P (52) stumped trying to up the tempo brought Archie to the crease who spent little time in settling before putting the pressure on an already weary-looking spye team, with some aggressive running and stylish stroke play.

After a fine tea, courtesy of Dave Nelson, Sherston took to the field, hopeful of taking advantage of a demoralised Spye outfit. However, the visitor’s openers were stubborn. It took a quite brilliant one-handed diving catch in the gully by James Harmer off the bowling of Nelson to break the opening stand and when the second opener was forced to retire hurt with a tight hamstring, Sherston had exposed the middle order. However, despite the best efforts of all the bowlers in tough conditions, Spye’s Simon Ellis counter attacked with some fine stroke play on his way to a brisk 93, however, he lacked any substantial support it was left to Sherston to seek the 10 wickets needed to secure maximum points. We would be disappointed and have to settle for restricting Spye to 208-9.

All 7 bowlers used took a wicket with Andy and J.K the pick with two wickets each. All in all a fine all-round performance well played S.M.C.C!!!!!