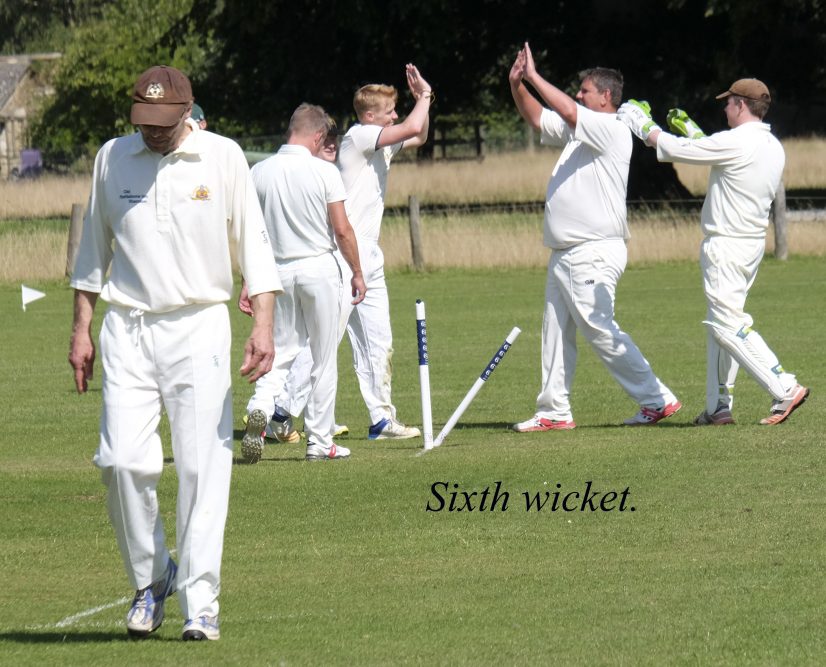 With just one game to go SMCC are on the brink of their first ‘proper’ promotion for many years and still have their fate in their own hands.

A home game to lowly Goatacre certainly had that ‘banana skin’ feel to it. But any prospect of a debacle, was all but removed by a devastating spell of medium-pace bowling from the rapidly improving Archie Walsh, who, in the space of just 22 balls, took 6 Goatacre wickets for just 14 runs – 5 of them clean-bowled.

Goatacre had the fortune to win the toss and elected to bat leaving Sherston to take to the field, in clear defiance of the Met Office advice to stay out of the sun. Eight completely uneventful overs followed before, in both of their fifth overs, Pegg and Kutchera removed an opener each. Pegg was immediately rested and replaced by Walsh.

Walsh’s spell started innocuously enough and included his usual mix of extras, but once he got his rhythm and pitched the ball up, he was far too good for the hapless Goatacre batsmen who were repeatedly castled. Walsh started what turned out to be his last over, on hat-trick ball. A complete non-event, as it turned out, and was rested with the fine figures of 6 for 20.

There followed a spell of cricket which certainly wasn’t for the purist. Goatacre added over 30 for the ninth wicket amidst a selection of boundary balls and some spillage in the slips. Suddenly the partnership was brought to an end, by a surprise LBW, sending back Goatacre’s second top scorer, following the politest of inquiries from the bowler.

There had been some doubt earlier in the day, whether an under-eleven, batting at eleven, son of the Goatacre captain, would actually come out to the crease. In the end, his protective father, understandably – could see no danger at all. The young chap strode out.

He looked composed. His almost as young, partner, was quick to offer some great advice “if it’s on the stumps, defend it. If it’s not, leave it”. Learning fast, the young man saw off the remaining 5 balls of the over and watched from the other end as another 13 runs were added. Then his mate ran him out in a futile, and probably unnecessary, attempt to keep the strike. Goatacre dismissed for 103 including 21 ‘extras’, something that Magna need to keep in check.

In reply, all of Magna’s first six batmen ‘got in’, making at least double figures; and four of them got out. Harmer bowled by one that stayed in the air for considerably longer than he initially though it would. Fisk continuing, what is seemingly his mission, to send as many catches as possible.

Purser and Walsh both looking equally bemused, missing a couple of straight one’s from the Visitor’s Captain and best bowler. Most of the watching faithful agreed that to dismiss Walsh in this way, the delivery must have been completely unplayable.

It could have turned into a debacle; but it didn’t. Hall, as he has done so often this season, bringing serene composure to the occasionally jittery line-up. The simple beauty of his knock providing an elegant contrast to the brutality in which Captain Kutchera brought matters to a close.

Magna were left to celebrate being clear in second place with one game to go. In the same pub, the Goatacre players were contemplating relegation and the strange places they’ll have to visit next season. It’s a cruel game at times.