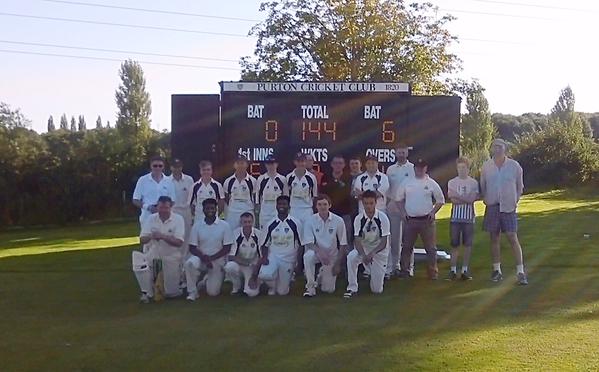 Sunday took Sherston on a trip to the picturesque ground of Purton CC to take part in a charity match for Ainslie’s Ashes (as discussed in my previous emails). It was a great day, with some old faces playing for both sides and also turning up on the sideline! A great day was had by all and the sun shone! A 25 over game was won by Purton’s much younger side with Sherston valiantly coming up short in the last over! The main part of the day was to raise money for the Pavilion Appeal and over £1600 was raised on the day! A great effort. We look forward to it being on the calendar for years to come (whether there is any money to be raised or not!). if anyone wants to donate any money to the cause (no obligation) or but a special purple grip (£5) to show you support, get in touch.

There is one anecdote that needs to be told. As described above, Sherston came up short in the last over (Dan’s lack of running ability was a factor), so with two balls to go the Skipper sacrificed himself to let Jed Pitman, retired Sherston dynamo, to face the last ball. He was bowled off the last delivery to cue pandemonium from the all present only for DFP to have called a no ball. Once the laugher had died down, he faced the last ball again, missed it and the ball rolled to the leg side, unfortunately Jed had wandered from his crease and was run out. So in his last innings before his second retirement he was out twice in one ball but had the honour of walking off with his good mate, Purton captain and Ainslie’s husband Phil! Rounded off a great day!